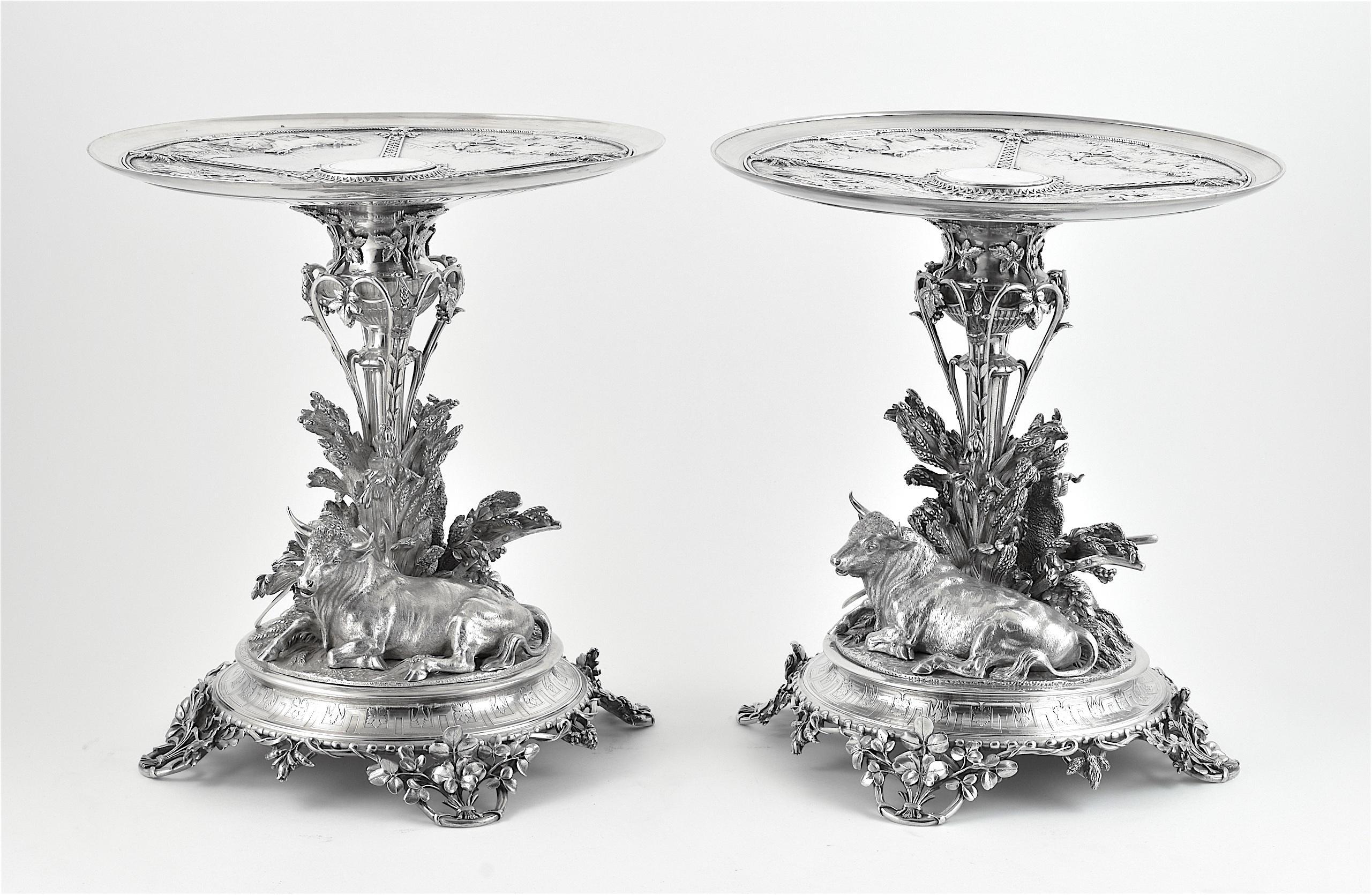 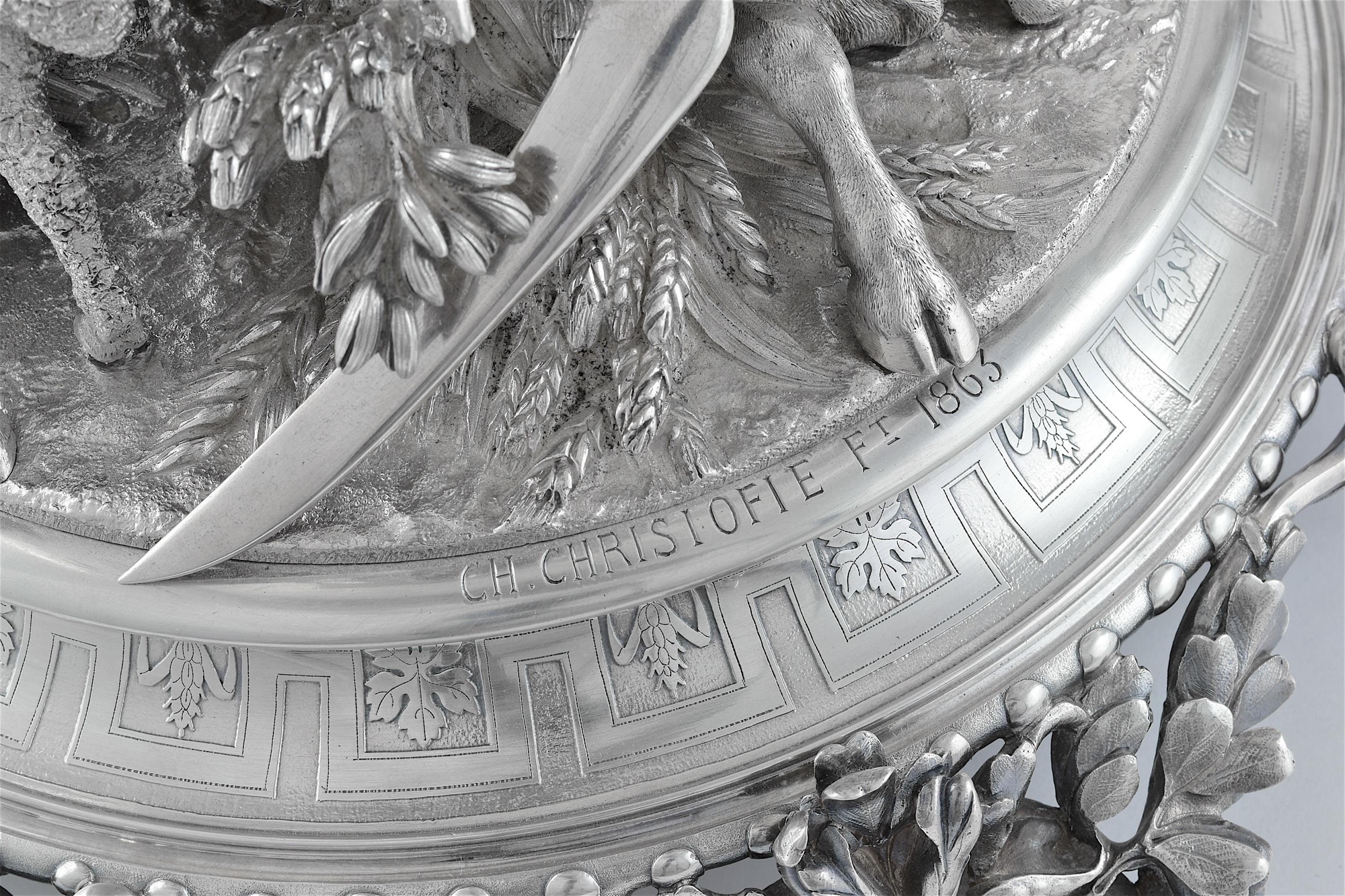 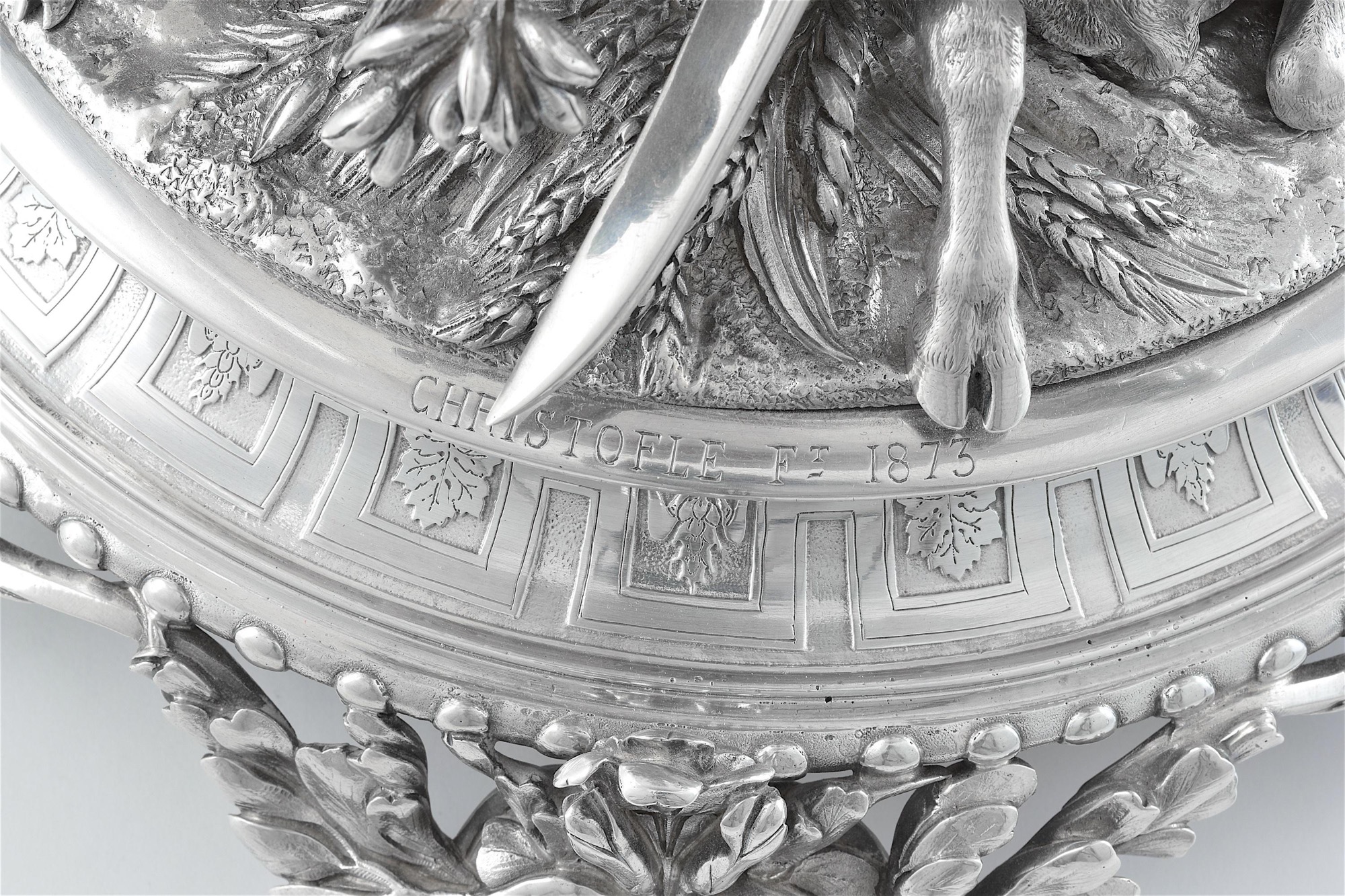 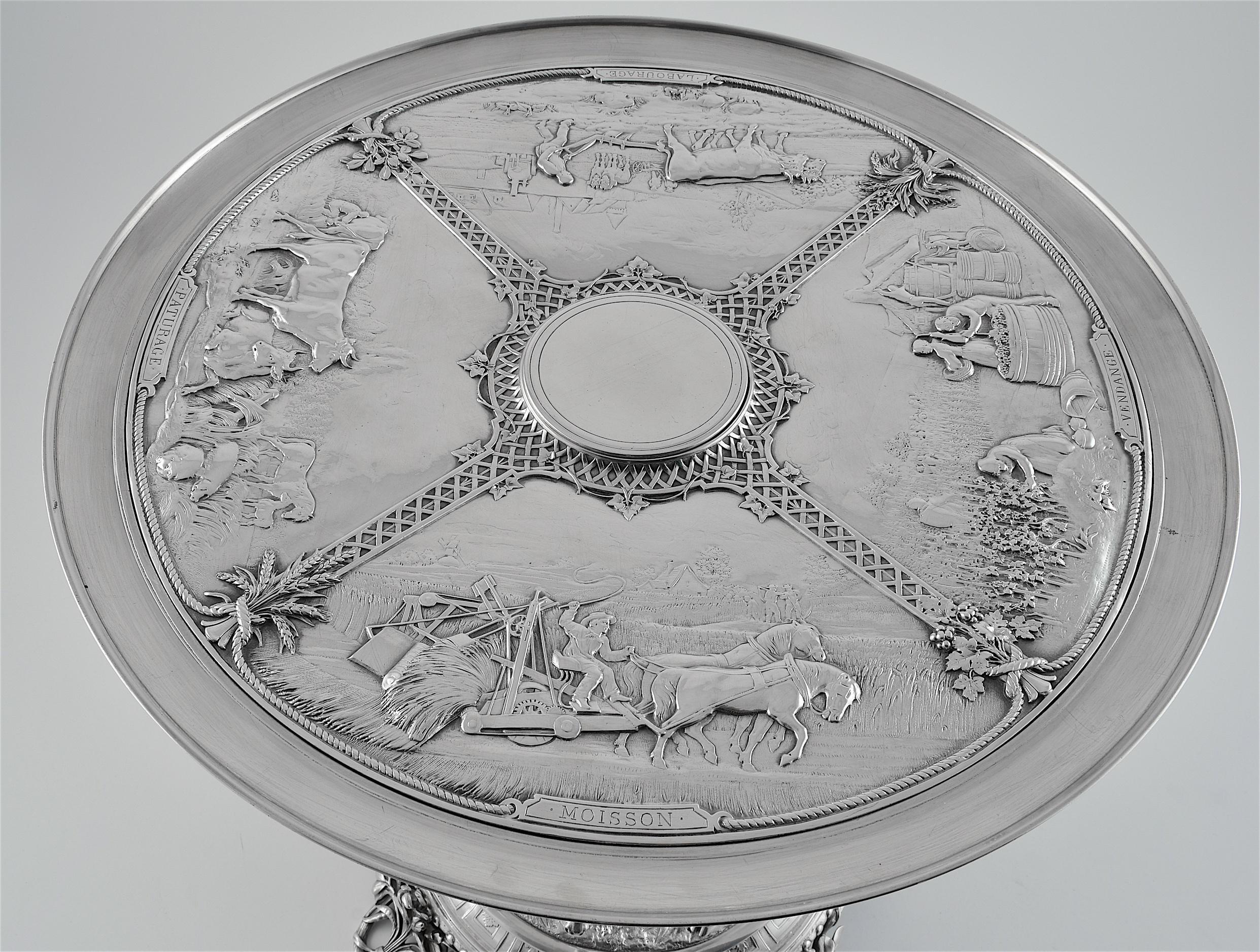 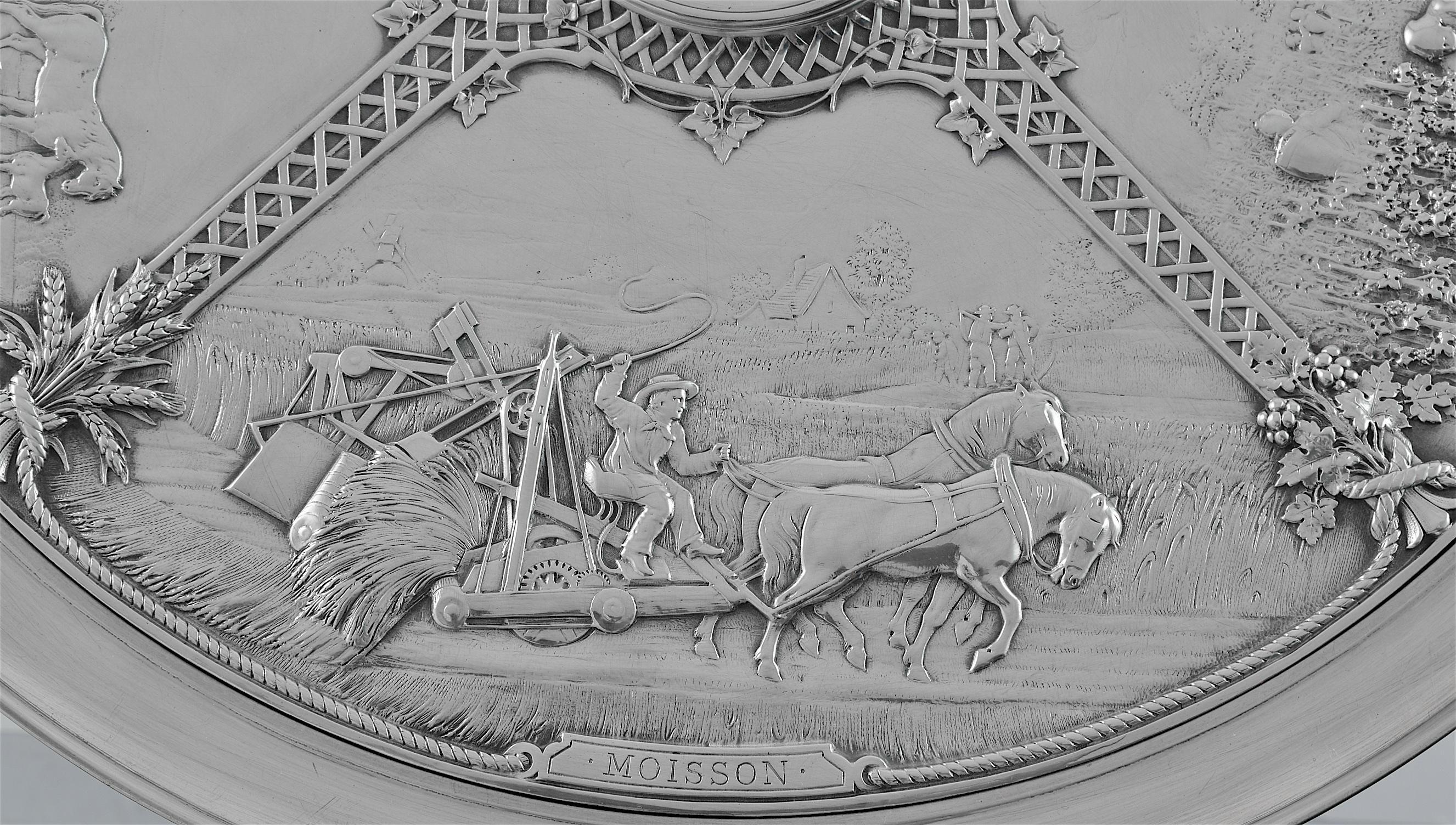 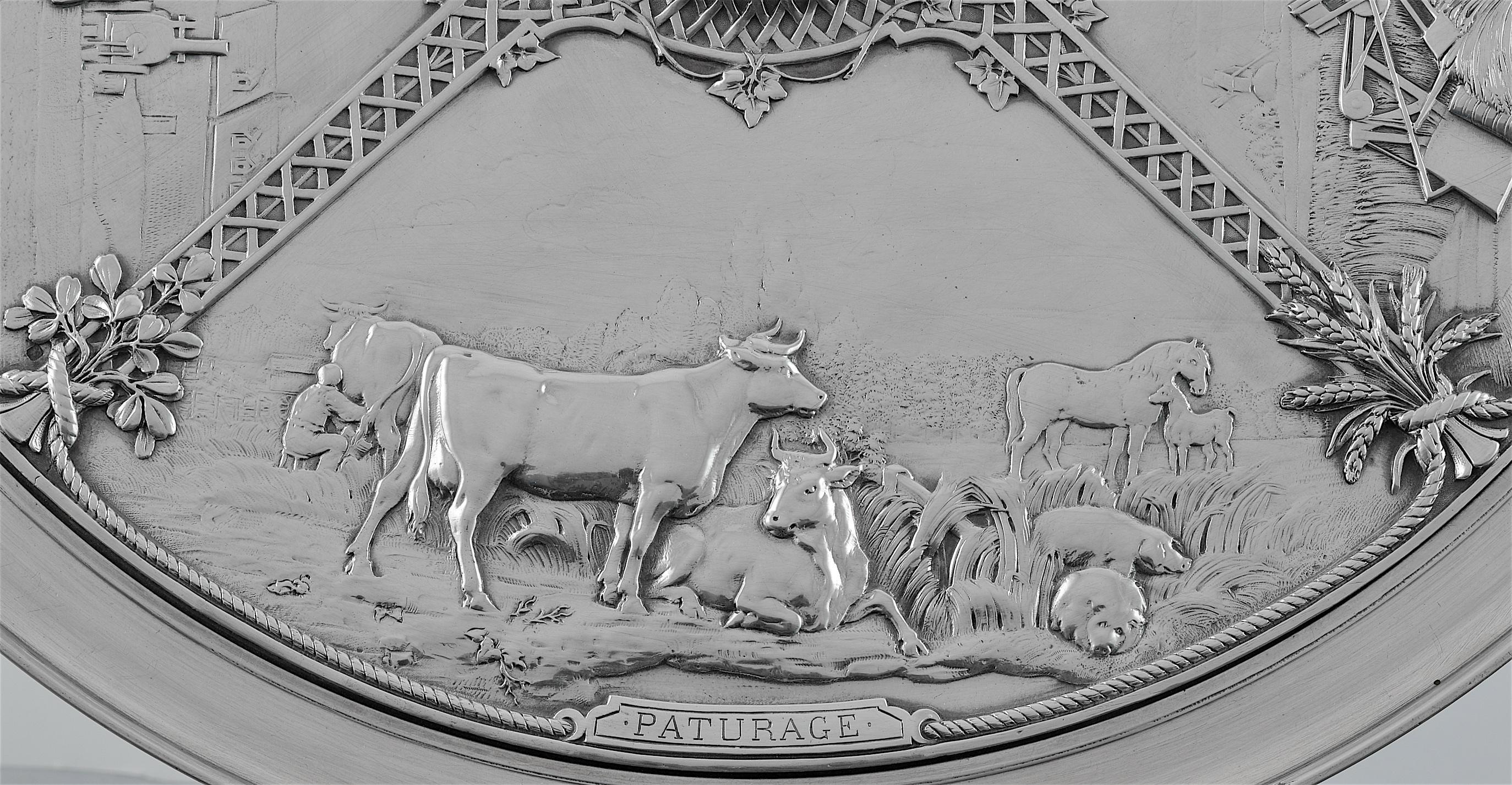 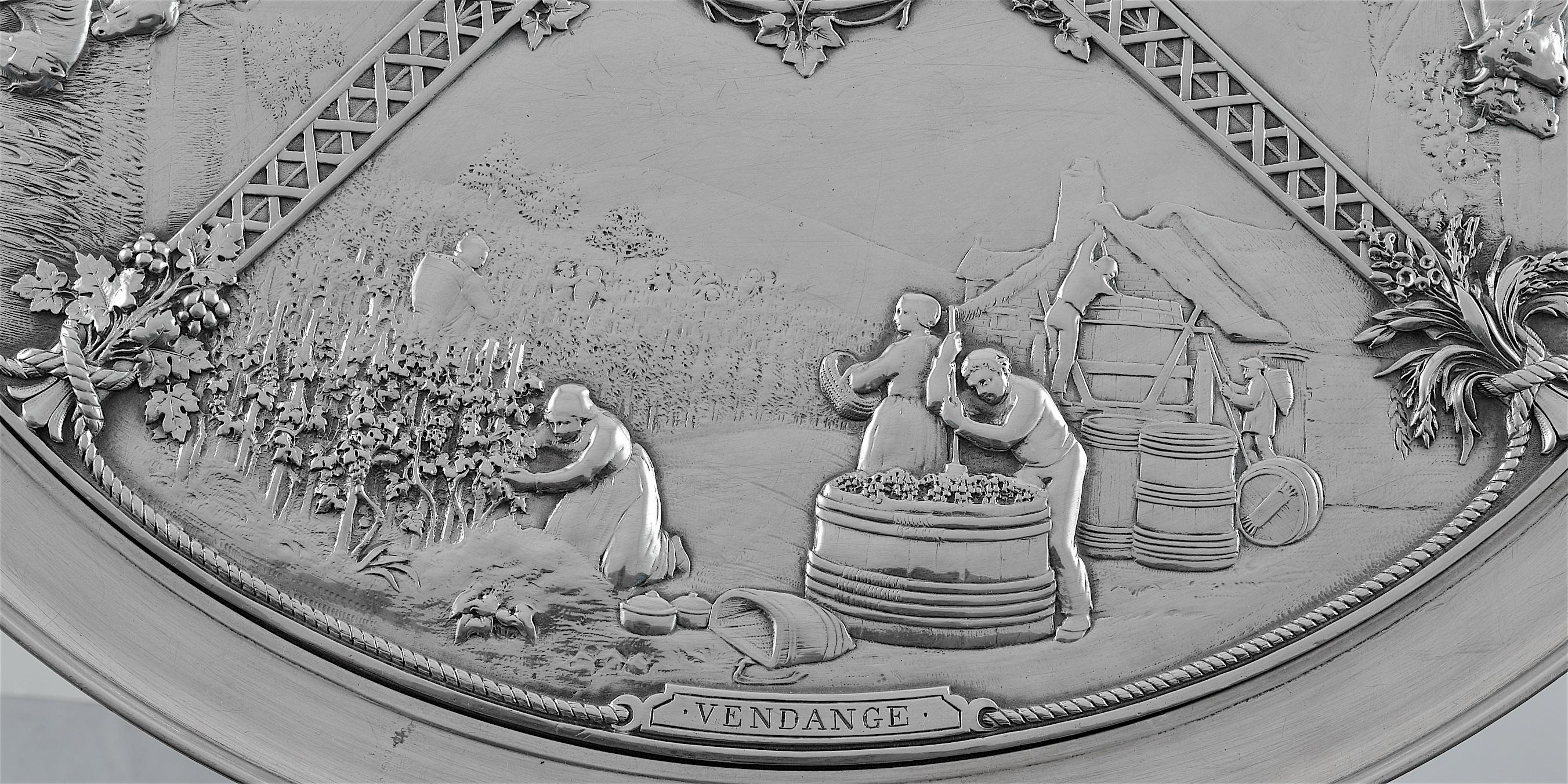 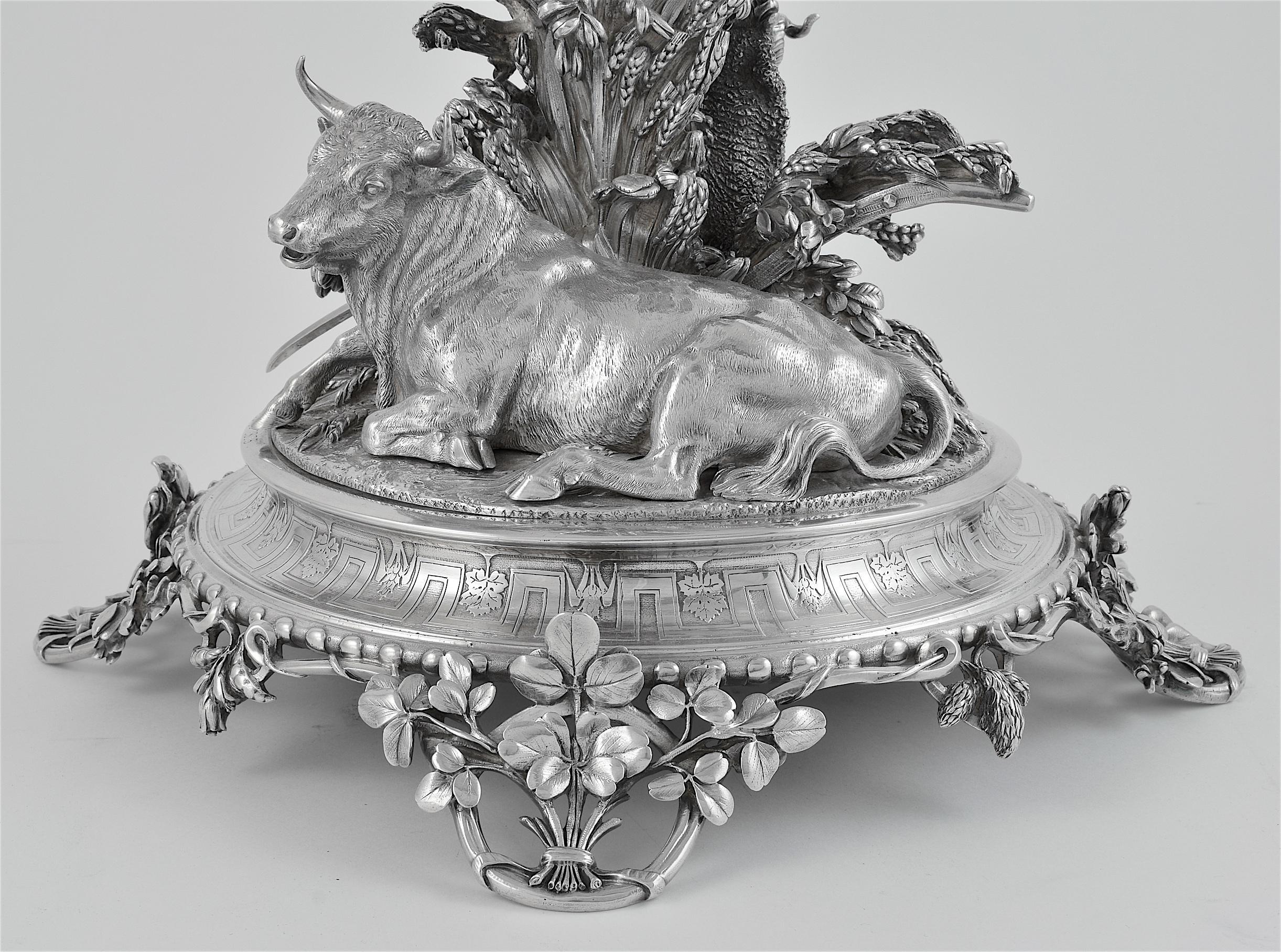 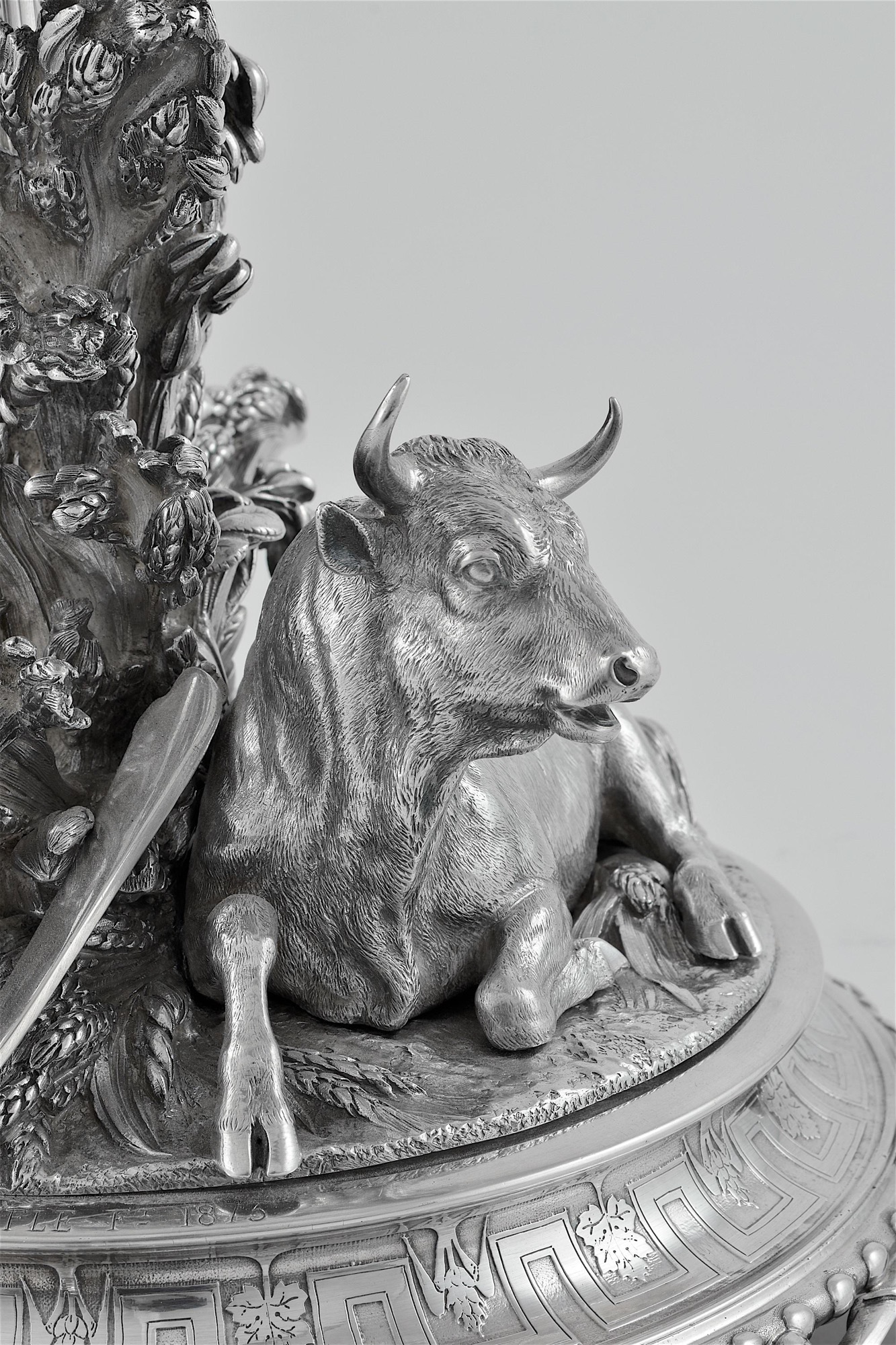 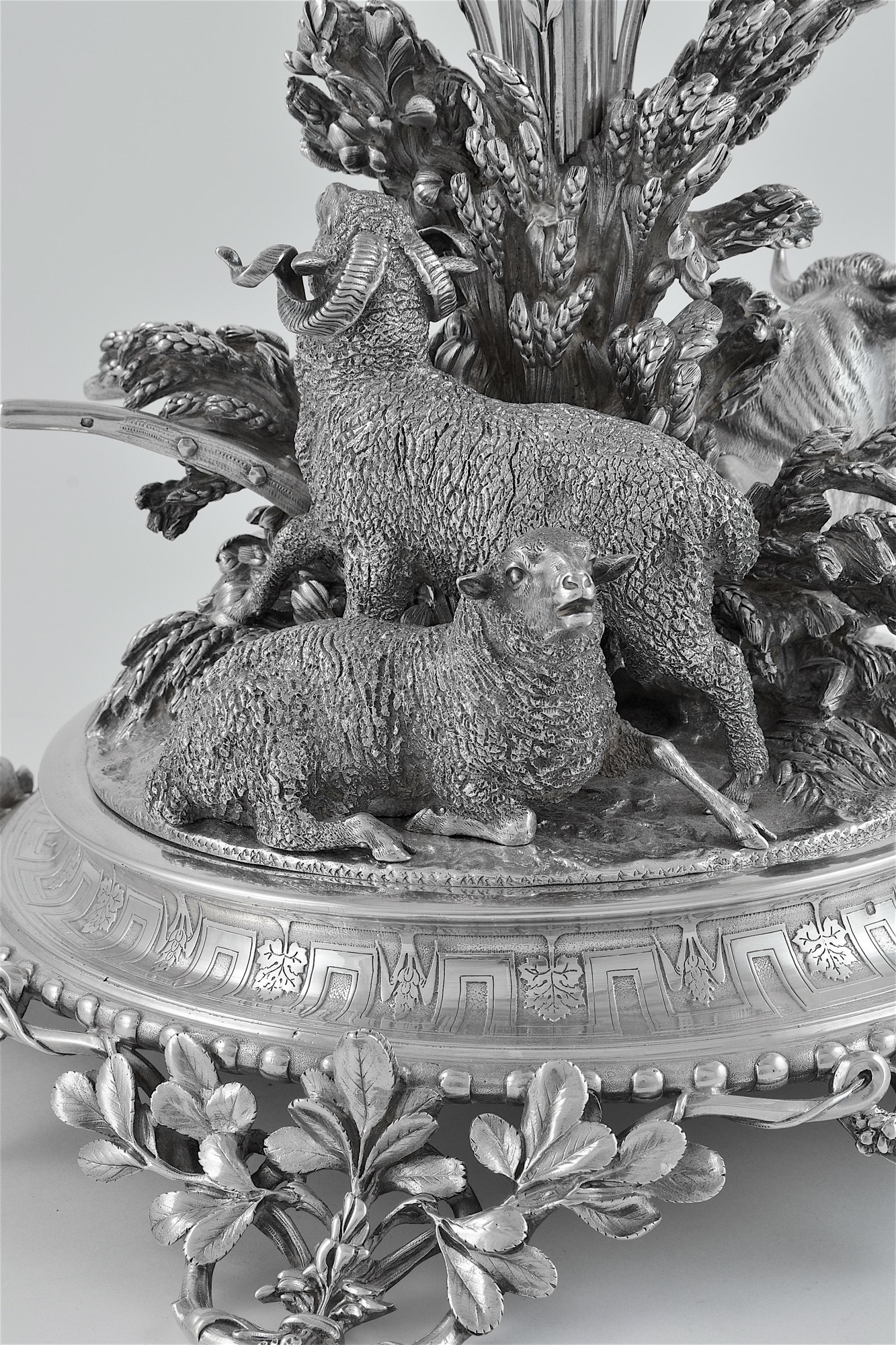 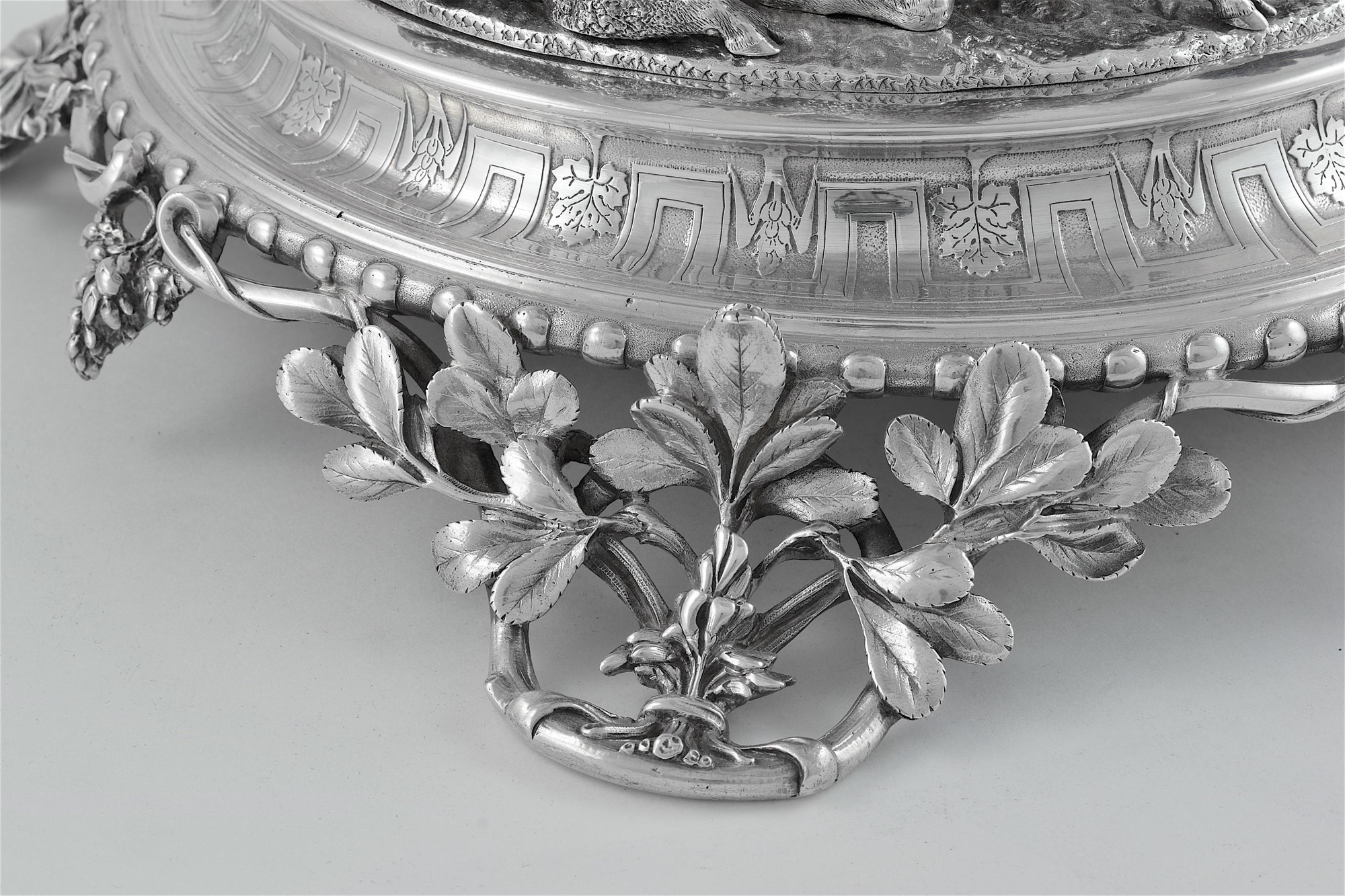 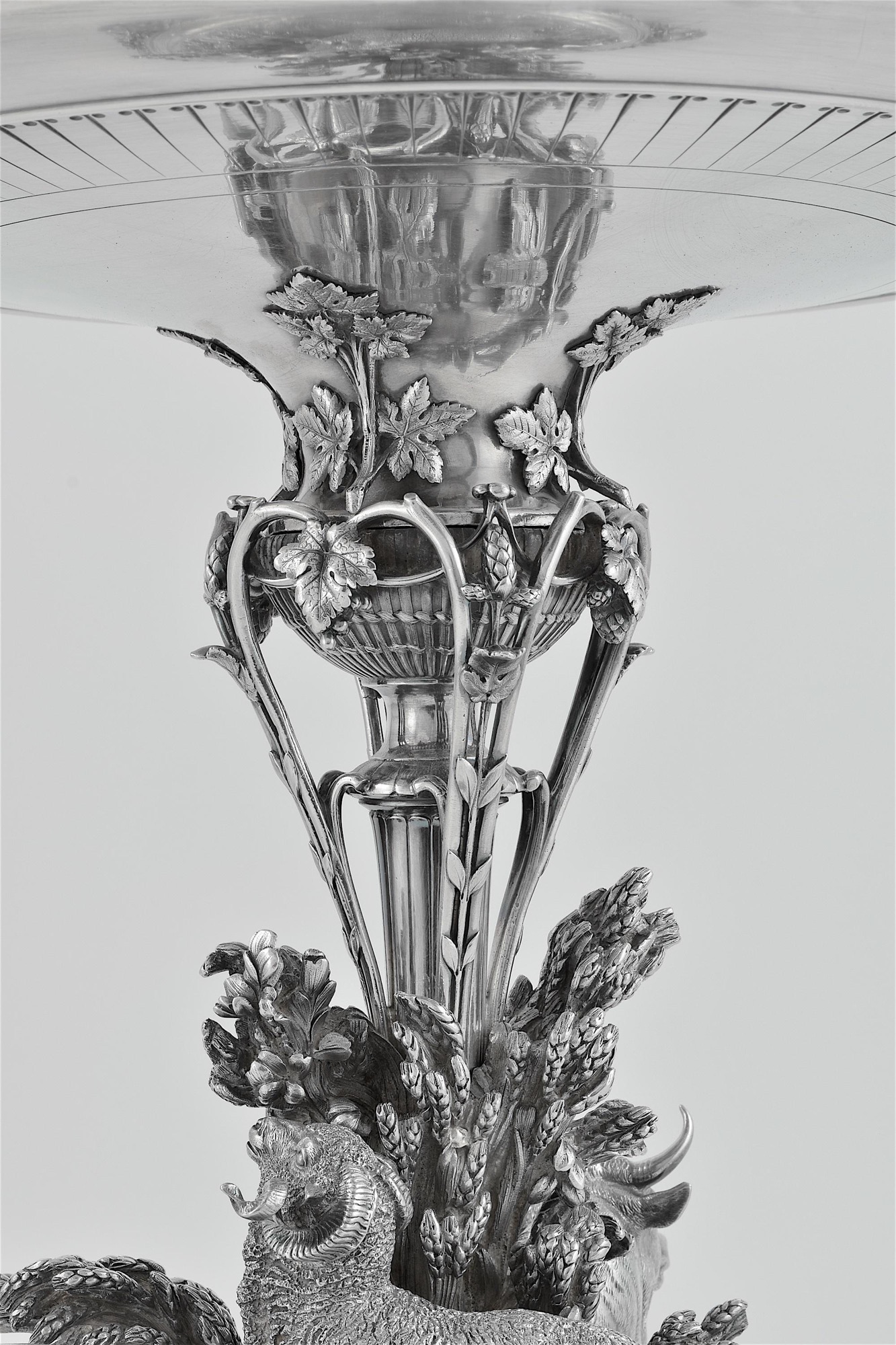 The design for these stands features in The Art Journal Illustrated Catalogue of the International Exhibition, 1862, page 65, with an additional central figure, possibly the goddess of the harvest, Demeter.

Henri Bouilhet, in Christofle, 150 Ans D'Orfevrerie, explains that 'Agricultural competitions were institued about 1860 by Napoleon III to stimulate agriculture, France's major resource even today. The awards were given every five years. After the collapse of the ...

The design for these stands features in The Art Journal Illustrated Catalogue of the International Exhibition, 1862, page 65, with an additional central figure, possibly the goddess of the harvest, Demeter.

Henri Bouilhet, in Christofle, 150 Ans D'Orfevrerie, explains that 'Agricultural competitions were institued about 1860 by Napoleon III to stimulate agriculture, France's major resource even today. The awards were given every five years. After the collapse of the

Empire, the Ministry of Agriculture held a competition among silversmiths so as to produce worthy prizes for farmers and stockmen.' It may be that these stands were designed as such awards.

MM. Christofle and Co. are not only famous workers in gold and silver by hand and machinery, but they especially flourish as the first establishers in France of the art of electroplating. Immediately after Mr Elkington's application of galvanism to this purpose in England, M. Charles Christofle took out his French patents, since which time he has been the Elkington of France. (The Examiner, London, Saturday, 31 May 1862, p. 8c)

Charles-Henri Christofle was born in Paris on 25 October 1805. At an early age he was apprenticed to his brother-in-law, Hughes Calmette, a manufacturer of copper jewellery. In 1831 Christofle became head of the firm, extending the range of its productions by adopting various modern manufacturing methods. He won gold medals at the Paris National Exhibitions in 1834 and 1839. He was also among the first in his industry to grasp the importance of the novel use of electro-metallurgy, whereby base metal objects could be either plated with silver or gold or, by the agency of electrotyping, entire objects or parts of objects created in silver or copper. The owners of the patents for these techniques, George Richards Elkington (1801-1865) and his cousin, Henry Elkington (1810-1852) of Birmingham, agreed in 1842 to grant Christofle an exclusive 15-year license for France. In a growing, competitive market, however, Christofle was obliged to defend his rights and it is said that by 1855 he had expended some £30,000 in litigation against his French rivals.

As well as developing a successful home market, thanks in part due to an order placed by King Louis Philippe for an entire service, Christofle was keen to export his wares. In 1848 an 'Exhibition of Galvanic Plated Ware and Richly Ornamented Jewelry, Of the manufacture of Messrs. Ch. Christofle & Co.' was arranged by Louis Müh, jeweller of 41 Chartres Street, New Orleans. In addition to an assortment of dinner and tea services, salvers, fruit stands, &c., many 'similar to those manufactured by [Christofle] for King Louis Philippe, the Duke d'Aumale, and the [French] Royal family,' visitors found 'a magnificent FOUNTAIN, three feet high, surmounted by a CHANDELIER of 10 lights.'

Charles Christofle worked tirelessly until the day of his death on 15 December 1863 to position his company among the largest and most successful makers of silver and plated wares in France. By then, under the superintendence of his partner, M. Ribes, who joined the firm in 1859, Christofle & Co. had gone from strength to strength, winning prize medals at several notable national and international exhibitions.

Among the many ambitious productions of Christofle's factory, few were more extraordinary and extensive than the grand plateau, four candelabra, several auxiliary pieces and a centrepiece made for the Hôtel de Ville in Paris. This ensemble created a sensation when it was shown at the International Exhibition in London in 1862. The Illustrated London News2 reported that the whole had been achieved by the collective efforts of ten artists and modellers working under the direction of M. Batlard, architect, Inspector of Fine Arts. 'In the centre is a ship, emblematical of the arms of the city of Paris; on her deck a statue, symbolical of Paris, and, supported by four caryatides, Science, Art, Industry, and Commerce. At the bow of the ship is an eagle, which guides her to her destiny, while the Genius of Progress lights her course; and at the helm is Prudence, whilst around are groups of mermaids and tritons.'

Christofle continued (and continues) to produce among the finest examples of goldsmiths' work. At the Sydney International Exhibition in Australia in 1879, for instance, the company showed a range of their productions, from plain table ware in the form of knives, forks and spoons to a selection of ornamental items: 'a wine carriage, fashioned in the form of a cannon, the carriage of which represents grapes and vine leaves beautifully wrought . . . A large table centrepiece with fruit stands or dishes to match, forming a Service du table, . . . the visitor is [also] drawn irresistibly to the examination of some exceedingly handsome sea services. . . . Some of the best exhibits on view, and some of the most valuable, are several jardiniéres of various patterns, which would form handsome ornaments for the table . . .'

Prices exclude custom clearance fees which will be charged directly to the client by your receiving courier, importer or government.
£85,000
Reference

Thank you for your enquiry.

We will get back to you soon

Are you sure you would like to remove "" item from the shopping cart?